I did a cover mock up for Oursinoir:


And drew a creature, one of the Purple Columns: 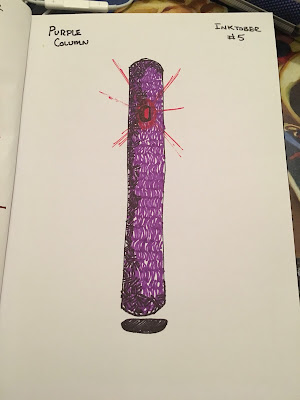 The supplement I'm writing is called Oursinoir: Strange Oceans, and it's about a city of wayward street urchins who work in service to vampiric mega-sized sea urchins (Seriously it started as a gimmick but I really like what came out of it now, so I'm sticking to it). They are divided up into gangs and they fight one another, arming themselves with whatever they can find throughout their city of Gavroche, as well as artifacts they pull out of the deep piles of fossilized fish bones that Gavroche is built on top of.

The city is also perched precariously over a toxic ocean, and seems ready to collapse into the sick green water at any moment. Far beneath the jagged edge of black stone debris crashes into the rocky shore line...broken buildings, foreign ships, bits of other worlds and dimensions formed into corridors inside pieces of living crystal.

So, I was going to write today about constellations and such, but +Michael Gentile asked the question (or really suggested I answer the question) "What's in it for me?", because the first post didn't offer much up in the way of player engagement. I'm really glad Michael asked about this. I had written the original post at about 3am (this one also, it's the witching hour), and while I thought the post mentioned enough adventure bits, it clearly didn't address them clear enough.

So here's a very rough map I started making: 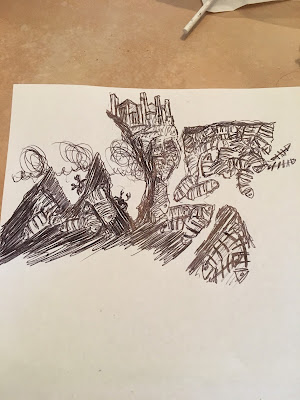 It's a side view to give a bit of a look at how the city is situated over the water, how the piles of fossilized fish bones go deep down into the earth (and they're everywhere) and it even shows some angry crab creatures waiting out of sight in the watery depths.

But I'd rather have something professional, so I commissioned +Thomas Novosel to make a map instead. I'm very thankful that Thomas is taking some time away from his own Runaway Hirelings: Ultimate Peasant Edition game product to work on this for me; his artwork is top notch and his maps are, too.

But seriously, what's in it for adventurers?

I see Oursinoir as three kinds of games: Survival, Exploration, and Street Fighting. I still have to playtest the hell out of this setting, I only just started writing it yesterday, but I think that, for a successful "adventure", all three elements should come into play.

The player characters are poor, parentless children who survive in a city where they aren't in charge a la Lord of the Flies, but they are still oppressed and suffering. The vampiric mega-urchins they serve act as guardians to a degree, promising them safety, but they send the boys and girls on "errands", out beyond the city limits to dig through soft soil and climb deep down into chasms carved out of fish bones, searching dark passages of calcified bone for weird artifacts to make them more powerful.

And everyone hates each other so they're always fighting. And the fighting is fueled by fear because there's never a break from the grueling life, for anyone. There are no adults because adults all work in the faraway factories that fill the wilderness of smokestacks far to the east, across the dug up stretches of the fish bone lands. And the children are afraid of growing up. And they are afraid of the vampire mega-urchins. And the purple columns that float like sentries through the city streets, making monsters out of children. And they fear monsters. And they fear each other.

Children sleep in dark cold places, there's never any sun here, just the warmth of one, and nights are long and terrible. 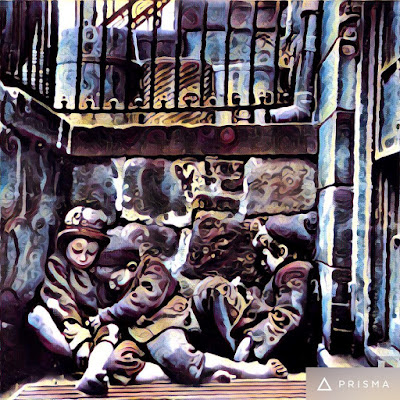 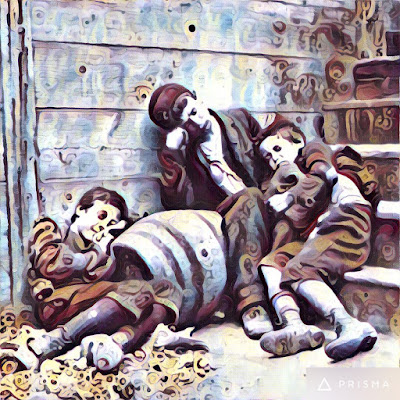 So what's the point?

Well if you do good on a run, if you find something useful, your patron sea urchin will reward you. More food maybe. Or a warm bed. Or make you a gang leader. Give you a piece of territory to defend. 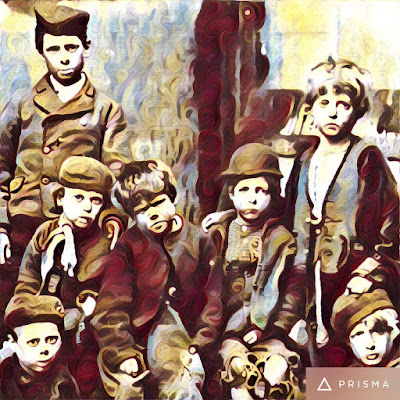 Sometimes the patron is just hungry. It's hard work capturing other kids, but it's gotta be done. The megaurchins aren't picky; the more sensitive children find other things to feed them; rats and worms and snakes, if they can grab them. The problem is a lot of the creatures that live here used to be kids, before they got caught and converted by a purple column. Besides, most kids no longer care. Especially the desperate ones. 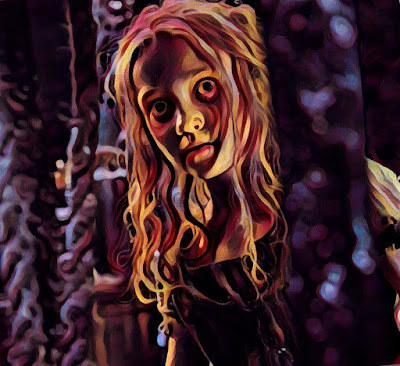 And in the city of Gavroche, everyone's desperate.

But there is rank and status.

Your rank is your level.

Your status is your place in the gang, basically name level. These things affect how gangs will interact. I'm still writing up this part.

You go out on errands for your patron, or sometimes you go it alone. Going on an errand means doing whatever the patron asks for, regardless of how dangerous. Going it alone is something you do on downtime, with or without the patron's blessing. It's more risky, but if you pull of a stunt (some kind of dangerous action), you'll gain renown, which is basically XP with bonuses to status.

So doing either way you gain levels, and if your patron picks you for an errand you have to do what they ask or face consequences, but you can also choose to go it alone and gain extra XP for whatever stunt you pull.

As I write this out, the details will fall into place and make a lot more sense. I also have to do a lot of playtesting to make sure all the bits function properly.

Here are my thoughts on character creation:

Characters are rolled up basically the same way as in Into the Odd (Don't own it yet? Buy it! It's absolutely worth it!), with the following changes:

Starting Equpment: You start with nothing; your patron (the DM) will give you starting equipment depending on the errand it needs you to perform. Expect anything like the following (you may roll 1d12 and pick one to start with regardless of the patron's supplies, if the DM allows it):

In "Into the Odd", your characters go on expeditions and find "arcanum", which are powerful (and weird) artifacts. Oursinoir functions similarly; there is no "magic" per se, but artifacts can bestow magic-like psionic abilities. Some artifacts are onetime use, some are consumed, and some are activated. The rarest artifacts function constantly...they are both powerful and greatly feared.

Okay, I'll write more soon. I'm enjoying working on this, and other people seem to be responding to it as well. I also have to update When the Seas Hunger and expand Black Stone Starship, and of course there's Across the Stars and Waste; work proceeds on both of those as well.

And I have to get back to Bag of Astronauts, but that I had to put on hold briefly.