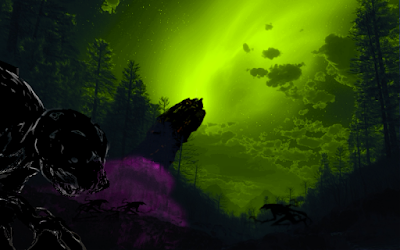 Here's an adventure for you. I tossed together the above image with lots of imagery I found on a google search and altered. I unfortunately forgot to copy down the sources, so apologies to anyone that hurts. Hopefully it's all been modified enough to justify its use. It's also not perfect, but do you get the idea there's a crashed ship and black shadow creatures slinking around? Great.

A slab of rectangular, black weirdstone has fallen from the sky and crashed into the forest, not too far from a village or city (or maybe it didn't).

Shadowy shapes -- hunched over beasts with long, strange limbs and spines that curve long and circular and heads that hang low to the ground -- stalk the forest now, hunting for meat. Their bodies are covered in a glossy black, ink-like skin; if anyone gets close enough, it seems to slide around like oil. There are mouths full of sharp teeth in various places, and all of them chomp and drool and crave.

This one has a mouth in its stomach; this one on its feet; this other one has a long tentacle growing from the back of its neck stump that ends in a circular maw full of gnashing, shadow fangs.

These creatures see in the emotional spectrum; Fear is bright hues to them, bright as daylight. Other related emotions, like apprehension, sparkle like starlight. Anger bleeds red across their field of vision. Those emotions are easy to track. Happiness eludes them. Love is as black as themselves.

They smell noise. They taste time. They hear light; bright light deafens them.

The creatures are led by a weird wizard, a column of weirdstone with shadow tentacles writhing all over it. It wears a mask that's a mirror, curved and embedded in its surface near its midsection, which comes to about human height. Thus humans that encounter the wizard see themselves when they look in its direction. There are runes carved around the mirror. These are buttons that activate magic, so the weird wizard is both a creature and a magical artifact.

The wizard can manifest knives on any one of its tentacles, and it has a reach up to 30'. Roll 1d20 to determine # of active tentacles. It can manifest 1d8 knives, but must reroll each round. Each knife attacks as a 3rd level fighter, and deals 1d4 points of damage. But the knife doesn't cut flesh, so it doesn't deal damage to hitpoints. The knives cut through time and dimension, so they slice away Wisdom. Anyone whose wisdom is reduced to 0 fades from existence forever, and the timeline is rewritten as if they never existed.

Knives can also cut silver cords, so if somehow anyone ends up in the astral plane facing a weird wizard, they can easily become trapped. Wizards attack silver cords as if the cord has an AC based on no armor, although the AC is modified by a person's wisdom bonus.

SPELLS/ABILITIES OF THE WEIRD WIZARD

D6 plants in a 100' radius from the wizard become anchored shadow ropers; they grow teeth and sprout black tentacles that can grapple within 20'. HD 3 (17hp) No. of attacks: 5 Attack +3, must make two successful hits to GRAPPLE, a grappled creature that doesn't break free gets pulled into a central mouth and suffers 1d8 points of damage

Pull Their Faces Off:

Choose a victim within 10' of the wizard; that victim makes a saving throw against spells. If they fail, their face is imediately ripped off of their bodies and appears dripping over the mirrored section of the wizard. It falls off in 1d10 rounds; the victim suffers 1d4+1 points of damage and must make a constitution check or become stunned for 1d3 rounds by the experience. The wizard can't wield any other magic while it wears someone else's face.

Instead of attacking, the wizard can withdraw all of its tentacles. It releases a cone 50' long. Anyone caught in the cone must make a wisdom check or have their minds pulled into a warped, alien version of the Astral Plane that is made entirely out of people's screams. The wizard exists in both places simultaneously. If it cuts the silver cord the victim(s) are trapped in the plane of screams forever, but it can be attacked in either place. The spell effects end after 1d6 rounds or the wizard is slain. If someone's cord has been severed before the wizard is killed, they are lost on the plane of screams forever. Same if their cord is severed by the wizard before the spell effect ends. Characters fighting on the plane of screams suffer a -3 penalty to all attacks, due to the incessant noise.


If the wizard is killed its mirrored mask portion (with the runes) can be removed. If someone wears it the mirror immediately fuses to their face permanently; they now perceive their surroundings like the shadow ink creatures. They'll be able to activate the abilities by pressing one of the runes. In addition to the 3 spell abilities above, the other runes have special effects as well. make up to 7 additonal abilities, all of them harmful or deadly. The easiest thing to do is to have each additional button sap one of the character's ability scores, but feel free to get creative (and post your own ideas in the comments below).

The DM records the character's wisdom score as a timer. Every day the mask is worn this timer counts down. It has no effect on the character's actual wisdom, but they might feel a slight burning in their mind. When the timer reaches zero, the character fades from existing, becoming a Weird Wizard on the Plane of Screams.

Where it bathes glorious in the screams of all victims across all versions of reality.


Touching any part of the weirdstone surface of the ship transports the players inside. It's a vertical colum with the rooms at wrong angles. If the players can figure out a way to ascend to the top of the slanted column of rooms, they will find a treasure chamber with a star-colored orb placed into an altar of some kind. This orb controls the movement of the ship, but the ship has crashed, so it's a useless orb full of a map of the universe.

But someone will likely find it pretty, and would probably pay handsomely for it. Probably a wizard. And who knows what secret magics they could cull from such a strange and wondrous device?
Email ThisBlogThis!Share to TwitterShare to FacebookShare to Pinterest