An Across the Stars Scene

An Across the Stars Scene 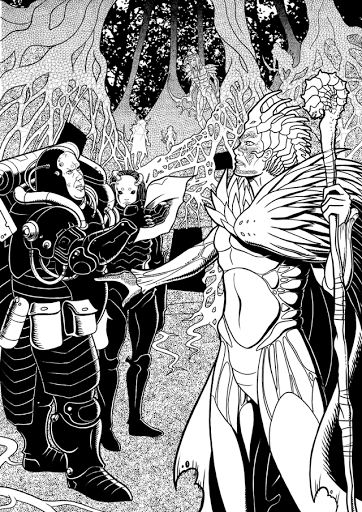 "Do not defy me, you tattooed witch!"

Aurelia Three Moons was not amused with the viceroy, or his delegation. She could barely stand the stench of their technology, whirring motors grinding deep inside their skulls and limbs, no doubt leaking radiation and poisoning their organs.

She sighed, closing her eyes and exhaling before saying,"This is a sacred place, Emrukai, and you are forbidden to be—"

"—I come on the authority of the Central Bank itself!" Emrukai shouted, thrusting the old, yellowed contract of the League's central financial system forward. Aurelia made no attempt to touch the sick paper, once a tree on some lush world, now fashioned into a terrible thing: a weapon, of a variety. One of her attendants grabbed the paper and scurried away down a side passage. There may still be hope to extract some genetic material...

"—it is a known fact that you are in possession of something that belongs to us!"

"The people you refer to ar—"

"—the people are known terrorists and saboteurs and have embarrassed the Ministry for the last time!"

Aurelia chose her next words carefully as she glared at the rotund man and his entourage that somehow managed to remain obsequious to him. She knew the League would come here one day, when their need was strong enough. Right now she had time on her side, but one day, they would come. As they had come for her peoples' land thousands of years before. As they had always come.

Takers, she cursed in her thoughts.

Then, with resignation scripted on her face, she muttered, "They are not in this temple. They landed near the river, 100 miles north of here. Now leave us."

She could no longer look Emrukai in the eyes. Triumphant, he and his entourage left, hurrying down the clay steps and through the temple's naturally grown archway.

Then, the three refugees emerged from the shadows of a side passage.

"I know," Aurelia replied, her voice empty and cold.