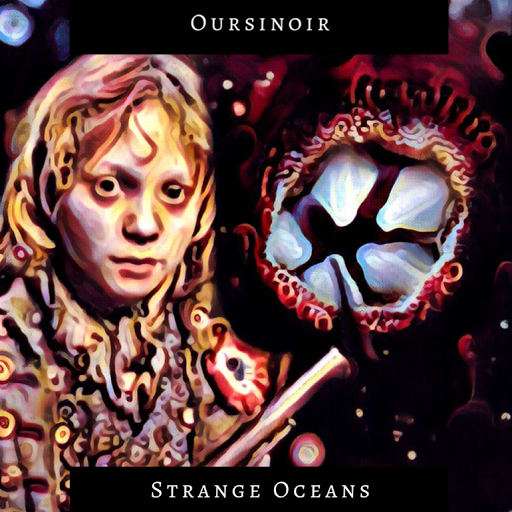 Oursinour: Strange Oceans is a city supplement/setting I've started writing for use with Chris McDowall's excellent Into the Odd ruleset. I love ItO's own city of Bastion, but my mind started to play with the idea of children, of urchins, and what if street urchins served sea urchins. So I made the above picture using various google images and apps (among them Prisma), and once I had that, my city of Gavroche was ready to be written.
So here is Gavroche. Let me know what you think of it so far.

Gavroche, the drained city. An old, and broken place of weathered cobblestone, crumbling bricks, and junked machines, built atop a pile of fish bones, the discarded refuse of an ancient mega beast that once trawled here, when all of this area was deep under water.

When alien queens held court in the vast, deep, black, perpetually at war in an unseen world.

But that beast is long dead and the waters of the ocean receded a long time ago. Now there is Gavroche, sitting perched like a dying bird, hanging on a precipice of jagged black rocks over an ocean of churning waters, green as bile that crest in yellow foam against sharp rock embankments,occasionally spewing up small bits of industry,depositing on beach fronts old temples dedicated to forgotten gods of a once industrious ancient empire, or bringing weird abandoned husks of ships from far off kindoms of the western world, where the mountains slither like worms, or bits of worlds and other dimensions, bound up in strange structures of living crystal that hunger for inhabitants to stumble through their interiors.

Gavroche, the city of lost children...of urchins divided into gangs fighting for scraps to live off of. They fear only the Columns, purple obelisks that float silently along the streets and whose gaze from their single crimson 'eye' turns boys and girls into monsters: lizards and winged horrors and other mindless, hungry beasts.

So the urchins fight. They evade. And they dig. They dig through layers of old fish bones that go on forever under their city, in search of food and supplies and powerful artifacts they wield to help turn the street wars in their favor.

And there are no adults, or there are but they are all far away and imprisoned in the factories that dot the bleak landscape that falls away from the edge of the world, east of where Gavroche rests overlooking a sickly ocean; the dire wilderness from which massive machines rise up as towers, spewing fire and ash into the sky, obscuring the sun, if such a thing still even exists. The street urchins aren't so sure. If it does it moves north to south directly over Gavroche, and it explains the strange warmth that flows in and out of the city, marking midday.

The children have no time to worry about where the sun is in the sky or what it looks like; all they know is that at night the grey haze that fills the sky becomes thinner, and a few scattered stars glisten through the veil of ash-tinted clouds.

The boys and girls instead listen to their patrons, one for every gang, the mighty and undying vampiric once-sea gigaurchins, who long ago abandoned their ocean home and came to Gavroche in search of food. What they found were scared and lost children, so they took them under their spindles.

And they made war of them.

These gigaurchins hide in old buildings, filling basements and bedrooms with chattering noise from their massive maws, circular mouths that still sing astrological murmurings, as they did for the wizards that summoned them, before they all died, when the columns arrived and ate all the magic.

The kids work hard to protect their patrons and keep them fed, lest they stop chattering. But their chattering keeps worse things then columns from invading the city. Deep things, lingering out of sight in the awful ocean, waiting to stalk the surface.  Occasionally there are crablike creatures visible on rocks that get exposed off the coast in seasons of low tide; golden shelled and full of hatred for the surface they witness.

They will come one day, chatter the gigaurchin patrons, when Mercury falls from retrograde and the triangle constellation reforms, three points of light shining from the center of the sky, their stark glow piercing the haze of smog and ash and fire that fills the sky in the daytime.

Still some stars can be seen in the distance west of Gavroche, across the ocean of bile, where black mountainous shapes slither and shift along the horizon. Here at night stars twinkle and a few constellations can be seen, their exposure helping the gigaurchins to read the entirety of the sky they can no longer see.

That's all for now. Next:

Let me know if there is anything in particular you want me to discuss or address.