Groping from the Stars 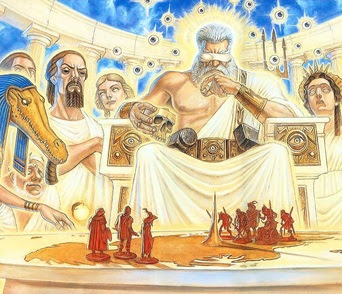 The gods play games with the creatures of the world. It starts as a matter of concern; they act because they must protect their creation. But eventually it devolves into competitive sport, to free the gods from the boredom of trying to watch their creations crawl across aeons doing nothing.

Because creatures are slow and short lived and rarely learn lessons. They build structures with their faces on them but these are really piles of tightly packed dust waiting to erode down to nothingness.

And the slow creatures panic; confused by the horrors sent to punish them. Priests point to the motion of the stars, reading invisible answers and declaring lines that have been crossed, writing laws to appease the gods.

And eventually the gods notice. And this is how a game is made.

In Vornheim, +Zak Sabbath wrote about "God's Chess", which adds a kind of "domain level play" as a mini-game to any D&D campaign. The DM and a player play through a game of chess, and when its over, wherever the pieces remain corresponds to an 8 by 8 grid laid over a city or a continent or a world map. Whosever pieces are left gain a benefit for their faction in that region of the map, such as having a contact who can provide aid or resources.

I want to build off of this concept, using minis instead of chess pieces. You can use any kinds of minis; you need to draw up different stats and abilities for them, and then play out a battle, the results of which will impact the player characters inside the game world. I'll try to come up with ideas for a future post, but for right now I want to get this idea down before I use it at my next game.

What You'll Need to Play "Tournament of the Gods"

An Arena
Minis
Deities and/or Demigods and/or Aspects of Supernatural Power
The arena is the play area; it could be as simple as a chessboard, or it could be a complex dungeon built from dungeon tiles.

The minis are the chess-like pieces that will be moved around, metaphorically representing the player characters or allies of theirs, and their enemies or other hazards and obstacles they might encounter. Some have special abilities that can be triggered during this "Tournament of the Gods", and each one has an effect on the D&D adventure or campaign, either triggered when they die or triggered when they are victorious in the tournament.

Finally, each participant chooses a representative...a deity, or some powerful force instead. Each of these have their own powers and abilities they can wield during the tournament.

Decide what the minis are and what some of their abilities are. For example: 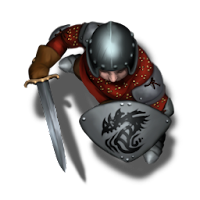 Attack: roll 4 or higher on d6

Can attack twice in a round: once for 2 points of damage, once for 1 point of damage on a different target

Special: At the end of battle, any surviving warriors grant PC's a +1 bonus to AC during their next encounter. 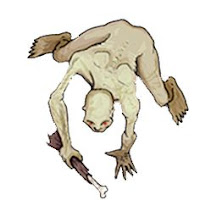 Attack: Roll 5 or higher on d6

On a successful hit, opponent is paralyzed for one round and suffers 1 point of damage.

Special: At the end of battle, any surviving Ghouls inflict a -2 CON penalty on the PCs during their next battle. Anyone reduced to 0 CON must spend a few days recovering due to unexpected illness.


Aspect: Ural, the God of Battle and Armorers: 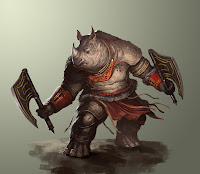 Ural is a mighty warrior god, known for his keen prowess in combat, but also for his toughness and durability. He is worshipped by armrorers who seek his blessing when they craft their wares, and by soldiers looking for extra protection.

Special: If you win, the players gain one of the following advantages: 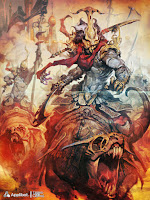 Alignment: Chaotic Neutral
Chaos incarnate, Xao Xeen appears as a roving band of feral beasts and monstrous warriors, moving as f caught in the midst of a terrible storm.

They are the noise that billows from the pits of the plains of Hastur, the echoing cacophony that drives the plains nomadic tribes to insanity. These are the worshippers of Xao Xeen, their human bodies marred and marked by deep gouges and drilled with bone jewelry to appease their patron.

Special: If Xao Xeen wins, chaos envelops the players or the next city they visit:

This is a simplified version of tactical play, so whatever rules you use with your minis (if you use minis) should apply here. Basically pieces take turns moving, then when they get close enough to each other, Melee begins. All dice rolls are based on d6.

Next, present the pieces available for play.

Each player and the DM take on a different role of a deity or "power", representing some supernatural force that has influence over the affairs of the world.

Players choose their pieces, place them in "starting areas" (on opposite sides of he arena) and play ensues.

Remember what happens here is symbolic; the players in the dungeon aren't. Exessarily goijg to encounter ghouls, although whatever they do encounter will be tainted by the subtle influence of Xao Xeen.

Ural is battling Xao Xeen for influence on the events of the party exploring a dungeon. Xao Xeen chose an arena with difficult terrain; a river crossing. Note this is an interpretative space and not actually a part of the real world the players find themselves in.

The rules were agreed upon before play began: for this game, Ural must defeat Xao Xeen's ghouls in 10 turns, or else Xao wins. Other tournaments can have different rules.

It is now turn 10, and Ural is down to a single warrior, and Xao Xeen has two ghouls left. The tournament is ended. Everyone agrees that the party will gain the benefit of the last surviving warrior (+2 armor for next in-game battle) but that Xao Xeen has won, meaning not only do the players suffer -4 to constitution for their next encounter, but Xao Xeen triggers an ability. The DM decides (in secret) the next city the players visit will be consumed by chaos. 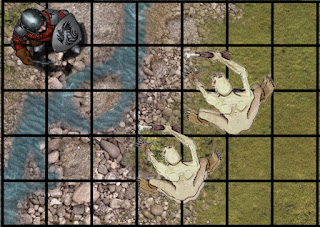 Using a city map (this example is using Vornheim), the players have determined that after 5 rounds, whatever units are left standing provide an effect on the city itself, in whatever sections there are units left standing. 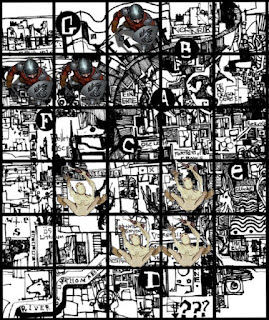 The warriors represent the force of good, while the ghouls represent a plague sweeping through the city. If the players can destroy all the ghouls, the plague is defeated. If not, the areas where ghouls remain become dangerous to travel in without being exposed to the disease.

Meanwhile, any tile where a warrior is left standing represents a sanctuary where the players can find safety from the spreading illness, or possibly some other benefit. A library perhaps or a sage is available with information to help counter the effects of the illness.

If there are ghouls left by the end of the five rounds, the players will face a risk of getting very ill. They could help fight off the illness by conducting research and going on an expedition to find some special herbs, or they might choose to leave in order to avoid the risk of getting sick, but left unchecked the sickness will spread and ravage the city.

Again, these are examples, and I still have to playtest the idea. I'm hoping to write up more units and such ISoG different types of minis and special abilities and effects for them.

If you have any suggestions, please share them! Thanks!