So some people over on Google+ helped me out with a little thing I thought of a couple of weeks ago: 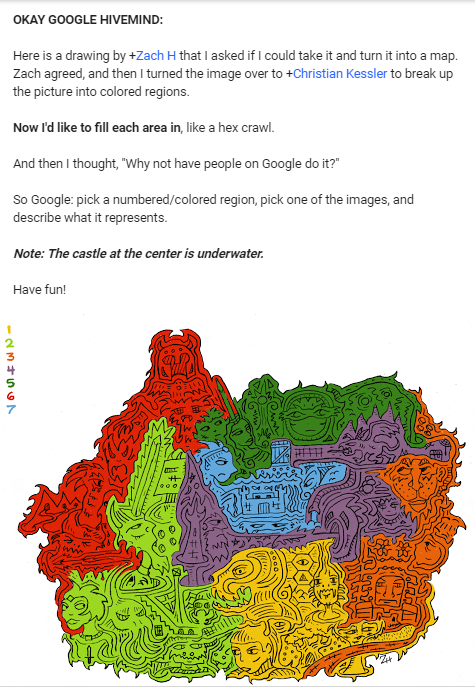 The drawing was done by +Zach H originally; I asked him if I could turn it into a map, and then +Christian Kessler did the coloring on it, carefully dividing up the images into distinct regions. Then I let it loose on G+ to see what people would make of each pictured area, as some kind of weird, non-hex based hex map. Or whatever. So here's what happened:

+Jay Exonauts suggested each section is ruled by different demigods, and then added the following:

RED: Granklon the God of Spilled Blood (the Helmet is his temple) demands sacrifice to keep wars from breaking out. The dragon creature in the lower portion is his enforcer, both to worshipers and infidels from other regions.

ORANGE: The eastern orange zone is ruled by Black Smoke on Still Ocean, a Vampire/Werepanther Demon Queen
The 4 coins in the sky are full moons, when the sacrifice is due, and near the lake the Ancient Hero is tortured nightly and regenerates each morning. Some say he is the Queen's brother, or lover, or both. At each sacrifice her jaguar head is placed on the body of a virgin, whose old head is rolled down the stairs of the ziggurat and there is taken to the crypts below to whisper secrets to the hero and abide eternity with him.Those who overhear the whispers learn a random spell and can cast it at the cost of half of their POW/SAN/LUCK/HP, or less on the day of a full moon

PURPLE: Once a small realm ruled by a kindly wizard. The wizard, whose name is lost, summoned a terrible demon from the inner dimensions and was dominated. The demon-seed in his brain was spread through magic, turning the once-kind people into soulless zombies that occasionally go on bloody rampages. The demon-seed spread through other realms and the Purple Plague is currently raging, pushing, and festering its way into any available, vulnerable region. Even gorgons, dragons, and behemoths are not immune to the demonic disease.
Only slaying the Plague Wizard might put a stop to it. But who can ascend that purple tower of blood and bone built from the bodies of plague victims?Any character encountering the Purple Plague must pass a saving throw (vs. wands) each night when they close their eyes or else wake up as a victim. A victim can still function, barely, but must pass a saving throw (vs. spells) to make any sort of meaningful choice. When such a saving throw is failed with a roll of 1, the plague victim goes on a murderous rampage, killing anyone in sight until slain or knocked out.

And then +Christian Kessler added to this:

The other thing that killing the Plague Wizard will accomplish is ending the spell that fills the lake beside his tower, which was once a valley ruled by tyrannical, cannibalistic elves. They've survived for centuries in their magically-airtight fortress through the controlled breeding of a livestock class. If the lake is emptied, they'll be free to expand across the island and beyond; they'll do so mainly in order to demand tribute in the form of people to eat.

There is a door hidden away deep in the caves beneath the Purple Tower which leads directly into the heart of the Castle in the Lake.

YELLOW: The honeycomb with the eye and pyramid - The long-abandoned Hive of the Crystal Bees.


This huge, crumbling beehive is crafted of bluish crystal. It has been looted, but searching it can reveal a cashe of Blue Honey (10% chance), or an active Psychic Shard (1% change, treat as a lightsabre with 10 rounds of use. Can be recharged with Blue Honey) However, the Hive is haunted by the psychic ghosts of crystal bees (Treat as giant bees, but they are etherial, and shoot psychic stingers at +4 to hit- anyone hit takes 1d4 damage, and looses a similar amount of INT) ﻿

So if anyone is interested in adding to the description of the map pieces, or expanding on the sections already started by Jay, Noah, and James, please do so in the comments section below.

And if you manage to make some kind of use of this map and the key, let me know! Either comment here or email me: thesecretdm@gmail.com