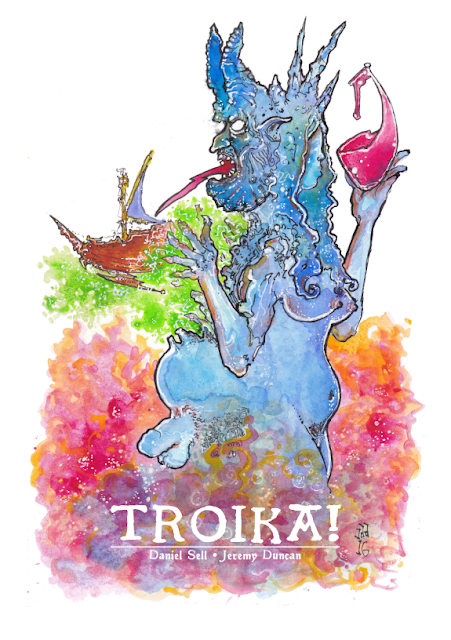 I worry that I'm not critical enough to do a review of a product justice; I tend to like a lot of things, and appreciate the effort people put into their work. Troika! is no different; I love everything about the game...from the rules-lite design to the setting bits drizzled throughout character backgrounds and spells and so forth. Nothing is laid out bare for the reader; you have to dig through each of the fascinating backgrounds of each profession to get a sense for the strangeness of the land this game is set in, and I find that to be absolutely wonderful.

So for a more detailed review, you can read what Scott Malthouse wrote over at the Trollish Delver: http://www.trollishdelver.com/2017/03/review-troika.html

You can also play around with a random character generator here: http://character.totalpartykill.ca/troika/

AND grab a copy of Troika! here: http://melsonia.bigcartel.com/product/troika

So, rather than reviewing the book (it's good, you should buy it), I went directly to Daniel Sell and Jeremy Duncan and asked them about their little game.

The Secret DM: So Troika! ...how did it get started?

Daniel Sell: It had multiple causes. Some time last year these happened:
I read all of Planescape. As a child with no money and two planescape box sets I had to settle for imagining what the rest of the game was like. Reading the actual books 20 years later, it came up short.
AND
I went on a podcast called The Smart Party to talk about what I was doing at the time (D&D). They asked a very sensible question: Why do I write D&D material when I have very little love for the system?

AND
I was re-reading my old copies of Dungeoneer and Blacksand. There's an uncommon life in those pages, one which you don't see often.
SO
I made Troika! as a tribute to these things that don't exist.

SDM: What were some of your concerns or obstacles during the development of Troika!?
DS: My concern was making a game that could inflict the correct state on the reader, who would in turn generate the correct games. As a result it takes a long time to write anything for the system, with every background, enemy, spell, etc. being written over and over to the point of meaninglessness until eventually it comes through the other side and manages to surprise me again. If I read something and it doesn’t make me insufferably pleased that I wrote it, then it’s not finished.
The rules were drilled to death in the same way. What I was making wasn’t a clone or spiritual successor of Dungeoneer, it was a game that would do anything, kill any darling, to create a specific state of mind and play. It’s no longer the 80s and we are no longer children, even Dungeoneer can’t be Dungeoneer any more, too much has changed. To create it again takes more than updating the rules and slapping on a fresh coat of paint.
Otherwise the whole system is designed to mesh with how I work: I like short, discrete pieces of information I can manipulate and work on without having to make room elsewhere. Poetry vs. prose.
SDM: How much playtesting did you do? How much did the game change following playtesting?
DS: I ran two small campaigns, with the rules changing weekly. Since the rules were already solid it was mostly small things like how much rations heal, how much damage feels good, how to die etc. Some changes were larger, like the initiative system. The original initiative was too chaotic, D&D style I-go-You-go was dry and tasteless (and I was against letting anything of it get inside). Eventually I arrived at a chit-pull system, which turned out to be a perfect fit, completely capturing the flavour of the game.
At what stage in the development did you know you wanted Jeremy Duncan involved?
DS: From the beginning. He gets it.

Jeremy Duncan: I can't remember if it was Daniel contacting me, or me frantically waving my hand in the air. I could probably go back and find the exact moment, but I kind of like the uncertainty and I think I'll leave it alone.

So far, it's been one of the easiest projects I've worked on, at least in terms of concept -- execution's always a challenge. I generally just react to Daniel's writing and turn in the result. I've been fortunate so far in the projects I've done in that I haven't come across a lot of editorial push-back. I turned in a cover with full frontal male & female nudity and he didn't bat an eye, which I'm pretty sure you can't get away with when working for WotC, etc.

As far as I know, I haven't had any direct influence on the setting. Daniel can correct me if I'm wrong. For what it's worth, I think I'm drawing from some of the same obsessions and influences as Daniel is when he's writing the text, or at least broadly compatible ones. Like Daniel, I loved Planescape when I was growing up, but didn't have the cash to drop on the supplements, so a lot of the Planes were filled in with my daydreams, or whatever it was I was reading or watching or listening to at the time. I still love it, but not as much as I want to love it. I remember him doing some Troika posts with a Gnostic angle right as I happened to be reading about the Early Church, so I think a lot of it is just lucky coincidences like that.

SDM: Is there more planned for Troika!, or now that it's released are you moving on to other things?

DS: For the foreseeable future, Troika! is all I'm going to write.
I've considered the possibility of making several cosmology maps, all contradicting each other. One of my major issues with Planescape was how mundane the arrangement of the cosmos was. You can communicate the details of the multiverse in a few pages, whereas the Gnostics dedicated volumes to the shape of things and still couldn't make much sense of it. The confusion is important to making it interesting.

Regarding Jeremy having influence: It's a bit like an exquisite corpse, each passing it blind to each other. In the moment there isn't much influence, but at the end it becomes an equal part of the whole.

SDM: So what's next for Troika!?

DS: Empires of Foliage.
SDM: Will there be Troika! adventures?

DS: It’s distinctly possible. I have some vague plans in that regard but it’s going to be a while until they happen.
SDM: Troika! is open to 3rd party licensing...is there anything in particular you're hoping to see people do with that license?

DS: Not especially. I’m curious to see what Troika! does for people, if anything, and I want to leave the option for them to go their own way if they don’t like mine.
How has the response to Troika! been so far, and has having the free no-art version been a benefit?

DS: Although I like to think I’m a publisher, I’m no good at marketing. Troika! has a very limited circulation, but people who have read it generally seem to like it. I think it suffers from not having an easily definable “hook” to sell the book, but I’m ok with that. It’s in no danger of becoming the next hotness.
As for the artless edition, I’m not sure. I know a lot of people have downloaded it, but I imagine almost as many haven’t looked at it beyond seeing something for free. Which is fine. It’ll sit there like a mind-worm, ready to act.
SDM: What do you most want to see/hear from the community of Troika! fans?

DS: I want to hear it being played and to know it’s doing what it was designed to do. Beyond that I hope they take ownership of it and run with it. If it somehow becomes a financial success and secure its future in the meantime, that would be great.
SDM: Jeremy, was visualizing Troika! a challenge in any way? The cover is beautiful, but was it your first attempt at the cover?
JD: I did a few practice sketches and a quick watercolor that ended up being the basis for the final cover. 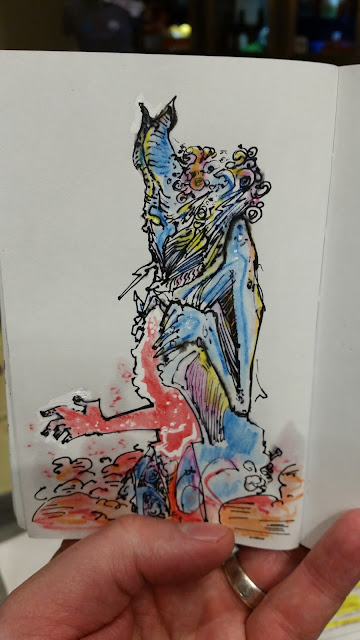 SDM: Is there more you'd like to do, from an artistic standpoint, with Troika!, and if so, what might that be?

JD: I'm hoping to make the most of the freedom I've been given with this project, however long it takes. I have a lot of persnickety, pigheaded, annoyingly contrary opinions about fantasy art and this is my chance to put them all into practice while I'm lucky enough to work with someone willing to inflict it all on decent people.

SDM Is there anything else either of you would like to add or discuss?
DS: I’m not very good at talking about my own work and I’m not an artist who is able or willing to sell themselves to money-men. Because of this it will be down to other people if this succeeds. I’ll keep making it on a knife-edge as long as I am able; just me, my little publishing house, my choice of editorial staff, and Jeremy. My hope is we become something like Palladium Books, a crazy person and his chums forging a strange and stubborn niche.
My most lofty goal is to earn enough through this to actually employ someone. That would be mind-blowing.

JD: "My hope is we become something like Palladium Books, a crazy person and his chums forging a strange and stubborn niche."

I'm already working on a blank template for cease and desist orders.
Email ThisBlogThis!Share to TwitterShare to FacebookShare to Pinterest